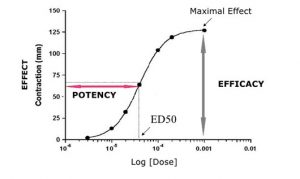 In this talk, important aspects of pharmacokinetics (PK) and pharmacodynamics (PD) were presented. Four elements of PK (ADME) were discussed in detail. Biopharmaceutical classification system (BCS), 2-compartment distribution model, destructive and conjugative reactions and the elimination phase of drugs were discussed for ADME trials. Some PK parameters were also listed and described. The second part of this talk was about pharmacodynamics, where the onset, duration and mechanism of actions were presented. In addition, some PD concepts such as ED50, efficacy and potency were discussed.